Version 0.3 of the Falcon WSGI framework is now available, thanks to all the hard work put in by our growing team of stylish and talented contributors. Extra special thanks to everyone who joined us at the PyCon 2015 sprint in Montreal!

Thanks to Richard Olsson we now have a new engine that compiles routes into a decision tree. This improves lookup performance for large APIs, and will also allow us to more efficiently implement some new URI template features. As part of this work, we also made it easier to use custom routing engines. 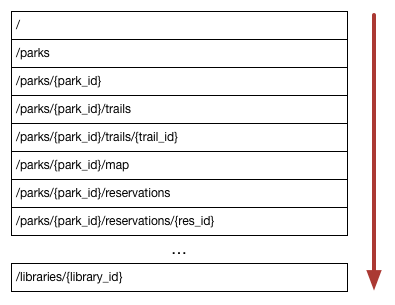 In version 0.2, Falcon’s default router compiles each URI template to a regular expression. For each incoming request, Falcon iterates through this list of regexes, attempting to match each one, in turn, against the requested path. This means that the order in which routes are added can make a big difference in performance; when a path is requested for a route toward the back of the list, a bunch of regex match operations must be attempted before finding the correct route.

The new engine, by contrast, takes a divide-and-conquer approach to match a given request path to a resource. This works well because developers tend to organize APIs hierarchically. Richard and I started with a couple of prototypes that implemented a generic routing engine. This engine traversed a tree of nodes, with each node representing a single path segment in the URL namespace. 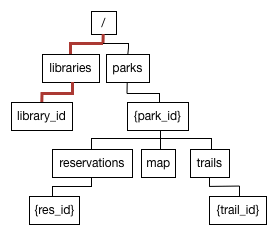 We found that the most efficient of the two prototypes ran slightly faster when looking up a long path with multiple segments. It wasn’t quite as fast for a simple path, but was still competitive. The order in which routes were added to the regex-based router also made a big difference; when looking up a route that was defined later in the router’s search list, the prototype’s divide-and-conquer approach easily won out.

The final engine incorporated into Falcon 0.3 takes this strategy one step further. It generates a static decision tree, rather than running a generic traversal algorithm over an abstract tree. The generated code looks something like this:

This provides an extra boost of performance by avoiding looping constructs and dict lookups. It’s especially fast when JITed under PyPy.

Also thanks to Richard Olsson, URI templates can now include multiple parameterized fields within a single path segment. For example, you might use this template to route a GH-style request:

Our new engine paves the way for implementing some other, long-overdue templating features as well. Stay tuned!

Thanks to the tireless efforts of Henrik Tudborg, we now have support for reading and writing cookies. A cookie can be read from the request via the new cookies property, which returns a simple dict:

You can also set cookies on a response with the new set_cookie method:

During the PyCon 2015 sprint, Clara Bennett added support to Falcon for Jython 2.7. Now you can use Falcon along with Clamp and Fireside (or ModJy) to create JVM-friendly web services in Python!

See also the changelog on RTD.