When measuring the performance of a web service, I like to find out how quickly the service responds to requests (latency), and how much horsepower is required to serve each request (efficiency).

Efficiency is important because it allows me to serve large numbers of customers at a reasonable cost (both to them and to myself). Latency is also important to me, because it correlates with usability; if an API responds faster, then apps using that API respond faster, and by extension the people using

those apps are happier, and more likely to spend more time with those apps. Yay!

Of course, there are many factors that influence web service latency and efficiency; one area that often gets overlooked or downplayed is the performance of the underlying web framework. Previously, I shared some performance testing results involving a queuing message service that used Rawr, a proprietary micro-framework I developed for Rackspace a few years back. Those results made it clear that even a small improvement in performance of the framework (in the case of Rawr, compiling it with Cython) can make a big difference in performance.

Several of you asked about getting the code for Rawr, and so I’m happy to announce that it’s successor, Falcon, has been open-sourced, courtesy of your friendly neighborhood Rackspace. If nothing else, I hope contributing this framework to the community will raise the bar on Python web framework performance, providing a laboratory of sorts for experimentation in this space. 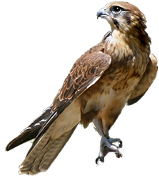 Falcon is a new, high-performance web framework for building web services and cloud APIs with Python. It’s WSGI-based, and works great with Python 2.6, Python 2.7, Python 3.3, and PyPy, giving you a wide variety of deployment options. While the project is still quite young (v0.1.6 at the time of this writing), it’s far enough along to be useful in real applications. In fact, we’re already trying it out in a few cloud projects at Rackspace.

Yet Another Web Framework

I didn’t particularly want to write Falcon. It would have been far easier to take something off the shelf and just plug it in. However, a few things pushed me over the edge:

How is Falcon different?

First, Falcon is already pretty fast, and will be getting faster. When there is a conflict between saving the developer a few keystrokes and saving a few microseconds to serve a request, Falcon is strongly biased toward the latter.

Second, Falcon is lean. It doesn’t try to be everything to everyone, focusing instead on a single use case: HTTP APIs. Falcon doesn’t include a template engine, form helpers, or an ORM. When you sit down to write a web service with Falcon, you choose your own adventure in terms of async I/O, serialization, data access, etc. In fact, the only dependency Falcon takes is on Six, to make it easier to support both Python 2 and 3.

Third, Falcon eschews magic. When you use the framework, it’s pretty obvious which inputs lead to which outputs. Also, it’s blatantly obvious where variables originate. All this makes it easier for you and your posterity to reason about your code, even months (or years) after you wrote it.

When would you use Falcon?

I’m not going to pretend that Falcon is the best choice for all projects, or even the majority of them. Here are a few things to consider when choosing a web framework for your next project:

Reuse. If you constantly go back and forth between web app and API development, you may want to choose a less-specialized framework than Falcon, so you don’t have to context-switch between two different environments all day long. That being said, many apps these days serve static assets and render everything in JS, in which case Falcon could be a nice way to build the backing API.

Features. Falcon is a low-level framework, which gives you a lot of freedom, but also requires a little more elbow grease. If you just want to make a quick website or app, you might consider something with more bells and whistles than Falcon (e.g., Django, Pecan, or Flask)

Maturity. Falcon is still a young project and not as battle-tested as some other frameworks out there. Caveat emptor.

Here is a simple example from Falcon’s README, showing how to get started writing an API:

You can run the above example using any WSGI server, such as uWSGI or Gunicorn. For example:

Then, in another terminal:

Here is a more involved example that demonstrates reading headers and query parameters, handling errors, and working with request and response bodies.

I need your help! Take Falcon for a test drive and tell me what you think.