OpenStack has proven that you can build robust, scalable cloud services with Python. On the other hand, startups like Voxer are doing brilliant things with Node.js. That made me curious, so I took some time to learn Node, then ported a web-scale message bus project of mine from Python to JavaScript.

With Python and Node implementations in hand, I compared the two in terms of performance, community, developer productivity, etc. I also took the opportunity to test-drive PyPy; it seemed appropriate, given that both PyPy and V81 rely on JIT compilation to boost performance.

Update: See my followup post on Python vs. Node, in which I share my results from a more formal, rigorous round of performance testing.

For each test, I executed 5,000 GETs with ApacheBench (ab). I ran each benchmark 3 times from localhost2 on a 4-core Rackspace Cloud Server3, retaining only the numbers for the best-performing iteration4.

All stacks were configured to spawn 4 worker processes, backed by a single, local mongod5 for storage. The DB was primed so that each GET resulted in a non-empty response body of about 420 bytes6.

In terms of throughput, Node.js is hard to beat. It’s almost twice as fast as CPython/Eventlet workers. Interestingly, Node.js spanks Eventlet even while serving a single request at a time. It’s obvious that Node’s async framework is far more efficient than Eventlet’s.

PyPy comes to the rescue, demonstrating the power of a good JIT compiler. The big surprise here is how well the PyPy/Sync workers perform. But there’s more to the story…

Not shown in the graph (below) are a few informal tests I ran to see what would happen at even higher levels of concurrency. At 5,000 concurrent requests, PyPy/Tornado and Node.js exhibited the best performance at ~4100 req/sec, followed closely by PyPy/Sync at ~3800 req/sec, then CPython/Sync at ~2200 req/sec. I couldn’t get CPython/Eventlet to finish all 5,000 requests without ab giving up due to socket errors. 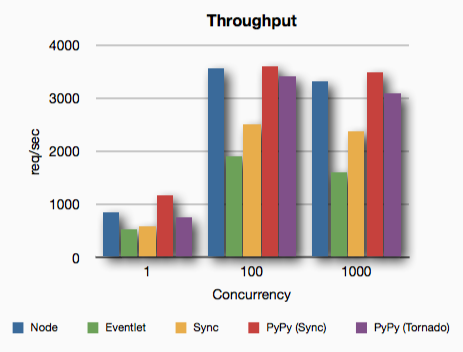 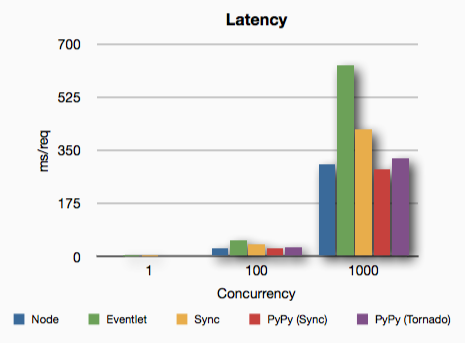 With a high number of concurrent connections, PyPy’s performance is very consistent. CPython/Sync also does well in this regard.

Node is less consistent than I expected, given its finely-tuned event loop. It’s possible that node-mongodb-native is to blame—but that’s pure conjecture on my part. 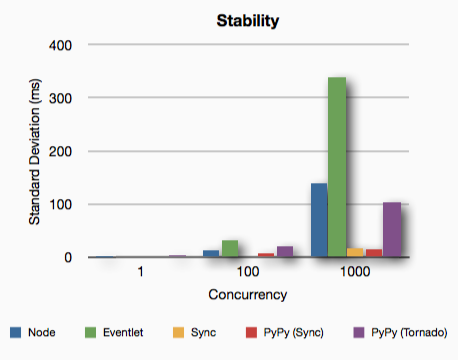 Node’s asynchronous subsystem incurs far less overhead than Eventlet, and is slightly faster than Tornado running under PyPy. However, it appears that for moderate numbers of concurrent requests, the overhead inherent in any async framework simply isn’t worthwhile11. I.e., async only makes sense in the context of serving several thousand concurrent requests per second.

CPython’s lackluster performance makes a strong case for migrating to PyPy for existing projects, and for considering Node.js as a viable alternative to Python for new projects. That being said, PyPy is not nearly as battle-tested as CPython; caveat emptor!